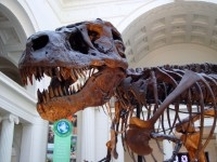 THE STRESS FACTOR
All stress is the same. Whatever the form of stress we encounter, our bodies respond the same way.  Whether we are anxious over the outcome of the election, watching a Halloween thriller movie, harboring a little road rage, or just upset that the barista messed up our latte order, the body sees it all as though we are being chased by a giant Tyrannosaurus-Rex.  The stress triggers our adrenal system’s internal fight-or-flight response and releases cortisol, the stress hormone.  Cortisol then serves to devour every energy source it can find in the body to fuel the body for the flight from the impending danger or the fight for our life.  Cortisol does this by converting protein’s building blocks (Amino Acid) into fuel.  The resulting loss of muscle mass decreases the metabolism and weakens the immune system.  The decreased metabolism leads to weight gain.  Weight is further challenged by cortisol’s inhibition of the function of insulin.  Thyroid function is also inhibited, and memory and judgment are impaired.  The increased blood glucose caused by the suppression of insulin leaves the cells starved for glucose. In response, the production of the hormones leptin and ghrelin is altered, resulting in an increased appetite and loss of satiety.  The body further responds to keep you alert by suppressing serotonin, the “bliss” hormone.    The lack of serotonin increases stress and decreases slumber, which increases cortisol.

Because the main function of cortisol is to fuel the body with the most assessable fuel for a quick surge of energy, it is the cause of our craving for simple carbohydrates.  These simple carbohydrates are commonly found as high fructose corn syrup, refined sugar, highly processed grains, and the other usual items filling the center of the grocery store… and, perhaps, your pantry.  Have you ever had a hard day at work or school and afterwards just want to curl up on the sofa with a box of bonbons?  You are not alone.

Simple carbohydrates are part of the love affair we have with all things sweet, fatty, starchy, and salty. But understanding the nature of our relationship to these temptresses may be the key to ending our infatuation. Essentially, these hyper-palatable foods commandeer our reward system and then drive it directly to hell.  And the main culprit behind the wheel is dopamine, the neurotransmitter associated with reward and pleasure.

So it is easy to see why, during times of increased stress and fatigue, we often resort to these so-called “comfort foods.” We want the energy, but we also want the reward. However, it is equally discomforting to consider why it is then so difficult to get off this ride.

One long-understood mechanism causing type II diabetes is long-term consumption of excess sugar. As blood sugar increase with sugar consumption, insulin receptors signal the increase of insulin. Insulin receptors constantly over-tasked with excess sugar essentially burn out. Insulin’s function of removing excess sugar is diminished until it can no longer compete with the constant bombardment of the sweet stuff.

Consider the similarities between insulin receptors and dopamine receptors. When dopamine is released, it floods our brain in the same way that cocaine or heroin do in drug addicts.  One symptom of this dopamine deluge is that is essentially erodes away dopamine receptors leading to the expression among cocaine and heroin addicts known as “chasing the dragon.” With fewer dopamine receptors, it takes a greater dose of the drug to produce the same high as before. And with each increased dose, more receptors are destroyed. The net effect is that the user is most often left with an endless pursuit for what can never be fulfilled and henceforth becomes an addict.

Research has demonstrated that comfort foods elicit the same dopamine response as cocaine and heroin. Further research reveals that the decrease in dopamine receptors is caused by the specific consumption of hyper-palatable foods. Considering these findings, it should come as no surprise that research confirms that obese people have fewer dopamine receptors and, therefore, have to eat a larger “hit” to experience the same reward. Instead of chasing the dragon, they may be chasing the bacon, but endless cycle of an insatiable appetite ensues all the same.

While we wouldn’t consider passing out crack to trick-or-treaters, hyper-palatable foods (especially the sweet ones) are proven more rewarding (and more potentially addictive) than cocaine or heroin, according to animal studies.  As noted by substance abuse researchers, they are also potentially harder habits to break than the illegal substances because food-related adaptations involve many more neural pathways. Moreover, comfort foods (appropriately nicknamed “crack foods” by some junk-food junkies) are known to reduce “executive” function areas of the brain, those associated with planning, organizing, decision making, and creativity as well as the abilities to govern irritability, impatience, and impulsiveness.

In tests, lab rats addicted to hyper-palatable diets displayed “shakes” after the food supplies were suddenly replaced by regular foods. They were also shown to be more withdrawn, twitchy, nervous and violent.  When rats were cross-addicted to sugar, alcohol, and cocaine, given a choice, the rats would invariably choose sugar.

The key to stopping the spiral descent is to address the cause, stress.  Once we identify the villain, we can stop feeling guilty (which only increases stress) and start taking charge again. So let’s connect the dots. Stress increases the stress hormone cortisol and lowers the bliss hormone serotonin. In response, the body increases its appetite, suppresses its sense of feeling full, and craves simple carbohydrates (sugars) and other comfort foods. Upon eating these, the vicious dopamine response ensues. Reason has it that, if we can reduce our stress, we can reduce our craving and, therefore, reduce the dopamine response. And there are ways to do just that.

First of all, understanding your enemy already puts you at the advantage.  When a craving strikes, recognize that this is in response to stress.  Then address the stress.  The many activities that help reduce stress include meditation and prayer, laughter, helping others in need, having some “me” time and/or family time, taking a nap, practicing deep breathing exercises, and participating in your favorite physical exercise or activities.

There are foods that also help reduce stress, particularly those high in Omega 3s, a good fat proven to increase serotonin levels. Omega 3-rich foods include cold-water fish, leafy greens and various nuts.  So, instead of having a hissy fit, have a herring.  Instead of wallowing in self-pity, have a walnut or two.

In general, it helps to learn to cope with life and to manage your environment. Sadly, much of our stress is self-induced, whether by negative perception, needless worry, vain pursuits, or (as is most often) by combinations of these.  Try increasing your perception of and expressions of thankfulness, faith in God, and love for others.

Just as the spiral winds down, it also spirals up.  The less sugar you have, the more clearly you think. The more clearly you think, the better decision you make. The less stress and sugar you have, the more stable your emotions. The less stress and fast food you eat, the more energy you have to do the things that you enjoy and the more serotonin you have to experience the joy. In the end, if you are going to be addicted, addict yourself to the things that reduce stress, increase health, and promote life.
Powered by